I’m currently revising my fourth novel… one that I actually think may be good enough to send out.

Doing revision is tough for me.  I prefer the feel of getting the first draft done.  Taking my outline and getting all of the raw thoughts onto the page.  Pieces of that first draft can be beautiful.  Pieces of it can also be the hideous stepchild of the devil himself.  That’s where revisions come in.

On my previous 3 novels, revision was the boring sludge I had to trudge through.  I hated it.  I didn’t want to do it.  Why couldn’t I be on a sunny beach on a tropical island instead.  Heck, -55° C with windchill was better than doing revisions.  Novel 4 was quickly turning in to the same slog.

I figured this was getting pretty stupid.  The work had to be done, so just f*cking do it.  That didn’t work too well.  What the heck was wrong?  I’ve been a programmer for much of my working career, and finding/fixing bugs (revising) was part of that.  Albeit with more immediate feedback on success or failure.  What caught my attention though was the pattern of work.  I’d already taken the programming process of requirements/architecture/design into my writing (all wrapped up in my outlines), so why not the bug fixing portion as well?  The only problem was that when something doesn’t work in a program, you can make changes and immediately see if you’ve fixed the problem or not.  In writing, whether the ‘problem’ is ‘fixed’ can be a matter of interpretation by the reader.

The end result is my current revision process, which seems to be working quite well… as long as I stick to the adage of ‘butt in chair’.  Still, getting my butt into the chair has become easier, and at times enjoyable, using this process.  Below are two sample pages.  The first one is heavily revised (though not the worst example I had) and the second is lightly revised.  The first page was roughly an hour and a half worth of work. 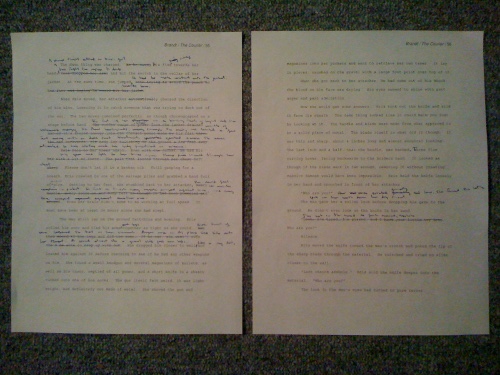 So what’s my process?  As you can see from the image above, the first part is that I do my revisions on paper.  I print out one chapter at a time, and then revise one scene at a time.  But I’m getting ahead of myself.

Step 1: After I’ve completed the first draft and done some plot/storyline and major blooper fixes, I send the novel out to my Alpha readers.  Alpha readers know they are getting what is essentially a first draft.  Their job is to comment on the plot, the characters development, the pacing, does it all tie together, etc.  Basically the big pictures items.  To me, this is analogous to a peer review of the architecture/design on software.

Step 2: Once I get back the reviews, I sit down and look at all the comments.  Do I think they are right?  Should I make some changes?  What kind of changes?  All this is done in my head for the entire novel (with some note taking) before I sit and do any work.

Step 3: Sit and do some of the bigger stuff on the computer.  The big change things I missed like hair color changing, different names, timelines problems if time is a factor in the story, etc.

Step 4: Print out a chapter, starting with chapter 1 and moving sequentially through the story.  Take the first scene and look at the notes from the Alpha readers.  Are there any specific comments I want to look at for this scene?  If so, I’ll do that first, revising in pen as necessary.  Once that’s done, I read the entire scene out loud.  It gives me a sense of what the scene is about, the pacing, and the flow.

Step 5: I look at the scene and see if it makes sense in the overall story.   Does the story advance because of the scene?  This is a big yes or no question.  If the answer is no, I put a line through the entire page (all pages for the scene).  Then I double check what was cut when I did that.  Is there anything I want to carry over to another scene?  If there is, I write it down in a notebook and continue to the next scene.

Step 6: Okay, I’m keeping the scene.  Is the scene a story in miniature?  Does it have a beginning, middle, and end?  Is there conflict or tension?  Is the conflict resolved, for good or for bad?  If it’s missing any of these, I re-arrange the scene so that I have them.  I’ll move paragraphs, lines, whatever is needed.  All in pen on the paper.

Step 6a: Does this scene reference anything I cut out earlier?  If so, toss it or figure out a way to get the information in another way.

Step 7: Now I look for specific components in the scene.  Is there dialogue?  If not, why not?  Would the scene be better with dialogue?  I go through the same process for engaging the 5 senses.  For a single scene, engaging all 5 senses can be too much for the reader.  I’ll usually pick 1 to 3 senses and make sure I’ve hit them hard enough to make the scene feel real.  I do this a paragraph or line at a time.

Step 8: Description.  When doing first drafts, my descriptions are pretty weak.  The car was black, or Her hair was wet. Sometimes, thats good enough.  Sometimes you want more, you want that kick.  The cars black exterior sucked the light right out the air, throwing everything around into twilight shades of blue.  Her hair, still wet from the sudden downpour, dripped into her eyes, blurring her vision and making the car look feral. Can you kick it up like that every time?  Only if you want your book to be put down while the reader rolls his/her eyes.  But you still need it sometimes.   A good place to think about kicking it over the top is when the character has a reaction to external (or internal) stimuli.  If the stimuli warrants it, make the reaction visceral, and believable.

Step 9: Once I go through the whole scene, I go back to my notebook.  Is there anything I cut out earlier that I want to (or could) place into this scene.  Does the insertion work here?

Step 11: Read the entire scene out loud again, looking for the same things as in Step 4.

Step 12: Start at Step 4 for the next chapter/scene.

Step 12a: Sometimes I see (either by my reading or from Alpha reviewers notes) that I need a scene in between the one I’ve just finished, and the one I’m about to start.  If that’s the case, I write the new scene in my notebook, by hand.  Once the scene is typed in (after I’ve revised the entire novel), I’ll print out the scene and follow the above steps on it.

I look at each step as a bug fix.  Find the bug, fix it.  Make the fixes logical and in order.  Just not to the point where the reader can see your process.

Once the novel is revised, I sit down and make the fixes on the computer.  Sometimes I’ll make minor changes as I type in stuff, sometimes I won’t.  Too much fiddling isn’t good either.

Once that’s all done, I’ll read the story (out loud) again, make any minor (or major) changes I see, and ship the draft out to my Beta readers.

Wash, rinse, repeat.  Until you are happy with the work you’ve done.