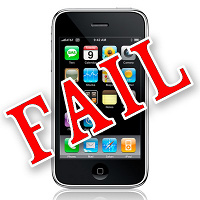 I’ve had my iPhone for quite awhile now, and I’ve been adding and removing apps as I needed them.  Before each removal, I synced the phone, and made a backup of the device, just to be sure.

Well apparently that’s not enough.  First, syncing the phone does not, by default, sync the apps that are on the phone.  Okay, that’s my bad.  I should have looked at all the other tabs in iTunes, and figured out what was going on.  Now that I have ‘sync apps’ checked, they still don’t sync since my Mac doesn’t have rights to the apps.  Great, thanks.

My phone had been getting slower and slower as time went on.  I did some research, and apparently a reset of the phone would fix the issue.  So I dutifully did a backup of the phone, did a full reset, and then a restore of the phone.  BLAM!  I lost almost everything.  The only thing that stayed was my email and calendar settings (oh, and my contacts list).  Everything else was gone.  Wiped out.  Not to be seen anywhere.  That included, of course, my handy dandy ‘Password Wallet’ that stored all of my passwords for the various systems I use and admin.

I’m not sure I have a copy of those passwords.

The iTunes App store keeps a list of the software I’ve downloaded, so I’ve restored all my purchased apps.  But c’mon.  Really?  A backup that doesn’t actually backup?  What the hell are you guys thinking?

Now some Apple dude (or dudette) is probably going to tell me what I did wrong, and why backup does what it does (my guess is something to do with DRM bullshit).  But that’s not going to bring back my lost data, or the lost time I spent getting my apps back (and I’ve only gotten back the paid apps so far).

All-in-all, I’m not a happy camper.

edit: But my iPhone is fast again!  LOL